Diary of a Dream IV 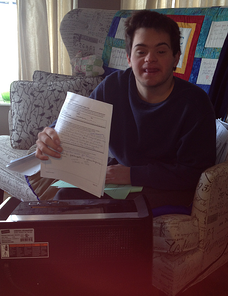 Out with the old and in with the new: regroup, purge and organize are what all of us do at the beginning of a new year.

James and I spent an entire snow day going through twelve years and eight different school placements worth of IEPs.  The educational system was a huge challenge and looking back on our experience brought back a lot of feelings.   Shredding his IEPs was very therapeutic; one friend confessed to me she burned hers.  The papers were gone but the memories remained clear.

The IEPs represented the countless different teams of people we sat in front of and the variations they presented at each additional meeting, with each person  weighing in on the recommended educational process for our son.  When I look back at our stacks of vision statements they had a common theme that did not alter much. From the very start we wanted James to be a good citizen and to have meaningful relationships at school and in his community.   We always anticipated James living away from home in a supported living arrangement and increasing his independence was always a priority.  What we had to negotiate each year, with a variety of overworked teachers whom we assume meant well (except for a few), was what was needed for him to progress. These negotiations hinged upon what their perceptions of James and his abilities or lack thereof were and how they would support his accomplishing these goals.

Our earliest experience was bringing James to the local school to begin preschool and finding out there was no such thing as an integrated or included setting.  James first placement was out of district to the least restrictive setting ~ an integrated classroom.   It was tough getting him back but it happened after two years in another town’s preschool, two years in a fabulous collaborative and another year at a disastrous elementary school in yet another town. Along the way I met remarkable parents who were passionate and determined to get reasonable educations for their children.  Their perseverance, when battling to get a quality education for their child who was non verbal or behavioral, was awe-inspiring.

We asked our town educators to please try to include James and their efforts worked extremely well for the first and second grades.  The third grade teacher made it clear form the start she did not want James in her class.  She treated him with disdain, so much so that the children who had grown fond of him and included him naturally took notice.  The school administration had changed and  I kept James home fearing for his safety at school.  He was once again placed outside of the district.

Low expectations and narrow fields of possibility defined the out of district placements.  They ran their systems on a less individualized basis than anything the public school had come up with.   I brought in a video to one placement showing James reading with his tutors, young women I hired weekly to keep him learning.  The school had refused to believe he was capable until I called a team meeting and asked them to provide a big screen to view James’ love of words and reading abilities.

One school had no criteria to advance to another classroom. A  student was  placed with a particular teacher and that’s where they stayed for one, five or however many years, with the same students who deserved bigger worlds and  better opportunities.

Our public school paid a lot of money to schools claiming to know (and to do) better.

Better in our case came when we convinced our local school to give James another chance at being educated in the community in which he lived.  To learn, to work and become known by people who cared about him and were willing to give him a chance, was our goal for James.

There is such a fear of the unknown- turning 22 was also turning away from everything familiar. In shredding James’ IEPs, the familiar wasn’t warm and fuzzy.  It was predictable. The new year is also a time to envision a new start and new opportunities to do better and to be better.   James is the leader of his team, he is the star in his life and we are all here to support him.  For him, life is no longer about fitting into a mold but about breaking out and learning and living in a big wide world of possibilities.