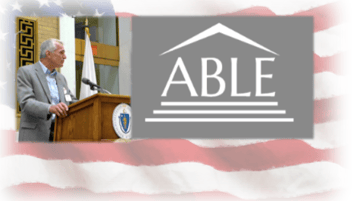 This month, Ohio became the first state to offer accounts made possible through the Achieving a Better Life Experience, or ABLE, Act with the launch of its program. ABLE accounts are available to individuals with disabilities nationwide through the state’s offering known as STABLE.

With ABLE accounts, people with disabilities can save up to $100,000 without negative implications on their Social Security Income benefit.  To find out more about the STABLE account visit: http://www.stableaccount.com/.

Update on ABLE in Massachusetts:

Last week, John Nadworny, representing the Massachusetts Down Syndrome Congress, attended a meeting of State Treasurers and representatives from the 6 New England states (MA, ME, VT, CN, RI, NH) to discuss the possibility of forming a consortium to offer the ABLE account to their constituents. This meeting was a first step toward crafting a platform for regional collaboration, as the New England states with smaller populations are concerned with achieving the critical mass necessary to effectively administer a program on their own. The consortium approach involves one state taking the lead and working together with the other states to develop a program that would provide meaningful benefits to the families in their state. At this point everything is still on the table; there may be a group of New England states joining together or some of the states may decide to partner with another program.  However, one takeaway is that all of the parties involved are carefully analyzing options and being diligent in making sure that their constituents are being well served.

One topic under discussion involves the ABLE or 529A accounts potentially being more transaction based, with account holders making deposits and withdrawals on a regular basis than traditional 529 plans, in which account holders save for a long term goal of a college education. This contrast in objectives may mean the ABLE account will be significantly more costly to administer than the 529 accounts.

In attendance at the meeting was Christopher Rodriguez of the National Disability Institute (NDI), a non-profit organization dedicated to building a better economic future for individuals with disabilities and their families. He introduced the group to  the ABLE National Resource Center, http://ablenrc.org/, an excellent educational resource for families about the ABLE account.

Currently negotiations are in process with financial institutions to implement a plan in Massachusetts. Stay tuned for future updates.

The content is developed from sources believed to be providing accurate information. The information in this material is not intended as tax or legal advice. It may not be used for the purpose of avoiding any federal tax penalties. Please consult legal or tax professionals for specific information regarding your individual situation. The opinions expressed and material provided are for general information, and should not be considered a solicitation for the purchase or sale of any security. Please see Important Disclosure Information here. Additional information, including management fees and expenses, is provided on Affinia Financial Group LLC Form ADV 2 and may be found here. Securities offered through LPL Financial, Member FINRA/ SIPC. Financial planning and investment advice offered through Affinia Financial Group, a registered investment advisor. Affinia Financial Group and Special Needs Financial Planning are separate entities from LPL Financial. The LPL Financial Registered Representatives associated with this site may only discuss and/or transact securities business with residents of the following states: AZ, CA, CT, DC, FL, MA, ME, MI, NC, NH, NJ, NM, NY, RI, TN, VA, VT​.